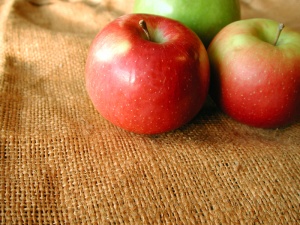 Two apples were going bad in our fruit basket. I’ve become frugal and knew I would find a use for these apples. So I washed, cored, sliced them and placed them in a pan with water, sugar and cinnamon.

Turning on the heat, I set out to wash a few dishes. Soon I realized I forgot to turn the heat down under the apples and the smell rising to my nostrils was not of cooking apples but of burning apples.

I quickly removed them from the heat and surveyed the damage.

“It’s only two apples,” I muttered. But nonetheless, I strained them and brushed the burned apple into the sink. After washing the pan, I put fresh water over the apples. Then I sprinkled some cinnamon (you can’t have too much of that!) and turned the heat on low and set the timer to 10 minutes.

As I walked down the hallway I smelled the lingering burning aroma. I’m very tuned in to scents or odors and this is not one of my favorites. Give me freshly popped popcorn (not burned!), freshly brewed coffee or cinnamon rolls cooling on the counter anyday, thank you very much.

As I’ve aged, I notice these things don’t bother me like they used to – and that’s a good thing. We’ve all heard the phrase, “Don’t sweat the small stuff” and it’s true. In my past, I might have gotten angry and tossed the entire mess. God has worked on me and today I simply took care of the mess, salvaged the apples and started over.

An analogy for life. We mess up so easily when we are careless. We can either learn from our mistakes or wallow in them. It reminds me of the children’s song that starts, “God’s still working on me, to make me what I oughta be…”

Thank you, God, for not giving up on me and tossing me aside every time I err. You scrape off the burned parts and remind me all is forgiven.